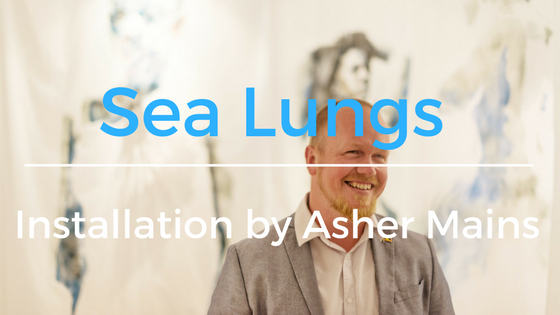 I love art. I love what art does. I love that art takes you from an unsuspecting cursory glance to a space of full engagement with some thought about our existence here on this earth. If you entertain these thoughts long enough art has the power to send you on an exploration of one of life's truths, as transient and beautiful as it gets- one could call it a Soul Adventure.

Earlier this month I was invited to the preview of Grenadian artist Asher Main's installation entitled Sea Lungs at Susan Mains Art Gallery. As I type the pieces are likely on their way to the official Grenada National Pavilion themed "The Bridge" at the La Biennale de Venezia- 57th International Art Exhibition, one of the most esteemed international art exhibits. This is the second  consecutive year that Grenada has had an official pavilion and also the second time Asher has exhibited at said pavilion- the first time with his Cocoa Farmers in 2015 (La Biennale de Venezia occurs every other year) .

As I approached the gallery's entrance an estimated three times larger than life stencil portrait on sail cloth greeted me. A light illuminated it from behind revealing the shadow of a dangling sea fan, an object that through its appearance and movement resembled a breathing lung (as I would imagine them).

Before the preview I had the privilege of exploring with Asher  what he intended to communicate with his pieces and the process that went into creating them. Each portrait has more dimensions and layers than those apparent at first blush. 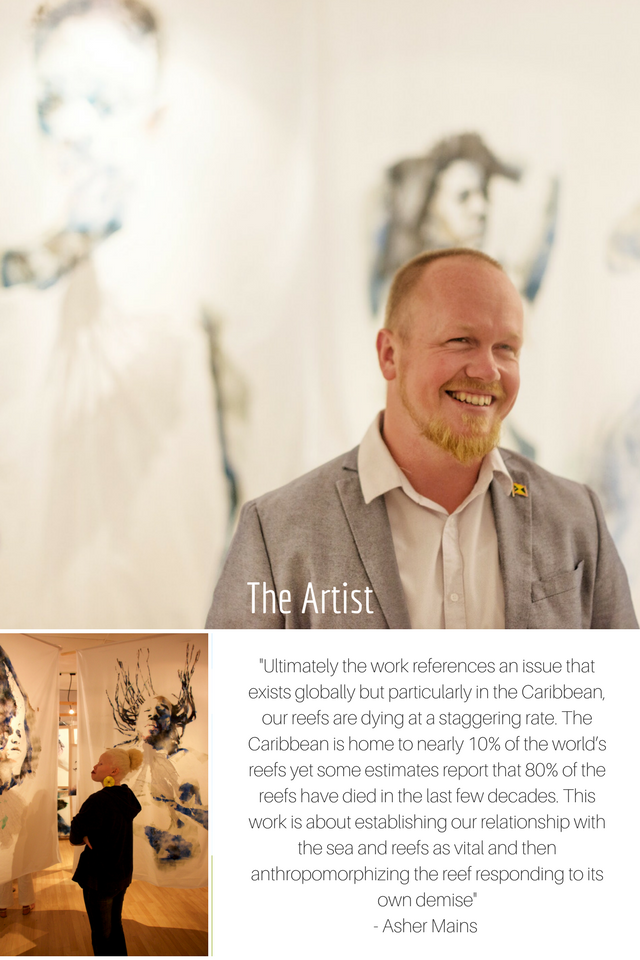 For those who are oblivious to the state of our oceans and reefs in the Caribbean and worldwide- there is a bit of a crisis happening. Reefs are dying rapidly due to overfishing, pollution and people literally taking bits of the reef away as souvenirs .  All many of us have ever known of the reef- the only interaction we have had has been with the evidence of its demise washed up on our shores. It is accepted as normal, it is all we expect- without realizing what the ocean is telling us. We cherish these sea gift, we use the brain coral to exfoliate feet or create jewelry with smaller more delicate pieces. We use sea fans as decoration. In my home they make excellent earring holders. 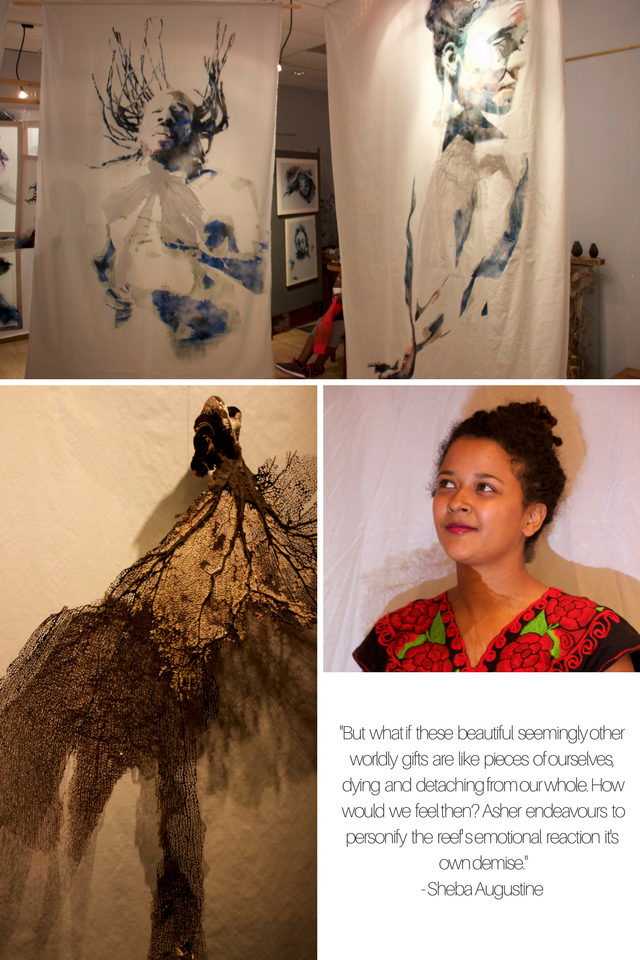 But what if these beautiful other worldly gifts are like pieces of ourselves, dying and detaching from our whole. How would we feel then? Asher endeavours to personify the reef's emotional reaction it's own demise.  The faces of the subjects appear somber, contemplative, accepting, anguished and sometimes frustrated. The faces were were of people I knew: my colleague, his cousin, my friend, my friend's little sister. I allowed their faces to render me vulnerable, completely relaxing into the current of empathy for their grief- grieving with the ocean-grieving with the reef. I was pushed and pulled the way the sea has often pushed and pulled me when I sit where the waves meet the shore. Grief can be all consuming- it textures our existence--we are completely immersed.

This installation, which you enter and are then surrounded by, has the ability to put it's audience in a simulated state of grieving. It allows it's audience to reconsider the privilege of it's ignorance to this ongoing tragedy. It is genius (in my humble opinion). Have you ever felt that gravitational sensation of emotional pain just considering a close family member of friend dying.

Poet Khalil Gibran tells us "Your pain is the breaking of the shell that encloses your understanding". Through the vulnerable state this installation has the power to evoke- one can start to understand the severity of the state of our reefs- and that it does matter to each of our lives-no matter how little we think it does. 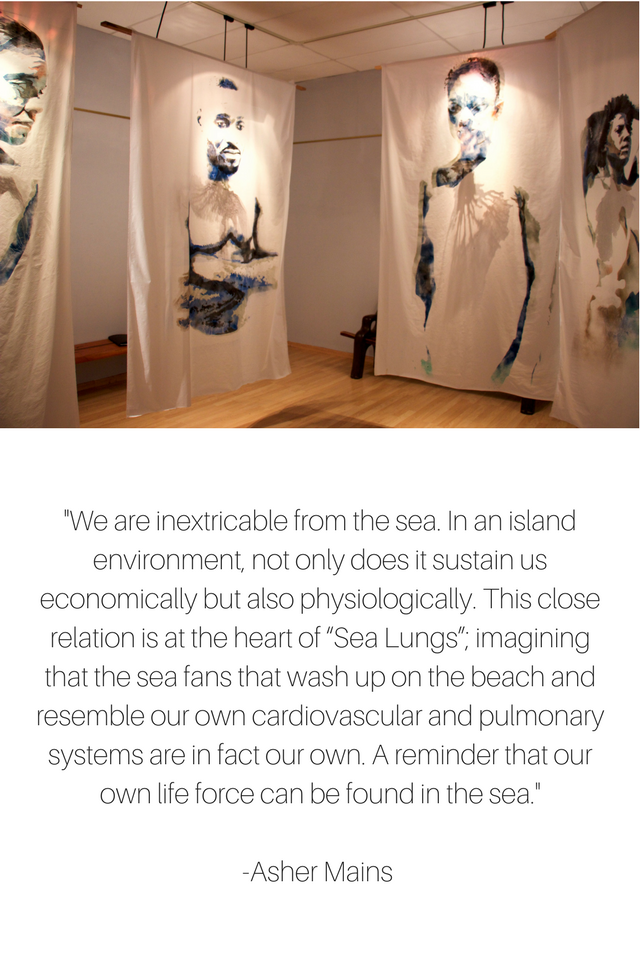 I thoroughly enjoyed observing how Asher created one of these pieces. I typically envision an artist painting portraits standing at their canvas glancing forward at a person or picture creating stroke after stroke until the portrait is complete. I fully acknowledge that this is a very reductionist and stereotypical view. Materials (in my imagination) usually used include oil paint or any other traditional media of choice, stretched canvas, paint brushes and a pallet.

The reality of how these pieces were created is less like the scene from Titanic. It could be perceived as quite technical if each process is observed in isolation. However, if strung together in a time lapse, I imagine, it is all quite magical. Asher asked friends to do a photoshoot at the beach. The creative emotional direction: imagine the stages of grief- denial, anger, bargaining, depressing and acceptance. He then reduced these digital images into threshold (into the shadows and light), projected them into bristol board stuck onto the wall of his studio and carved out each shade variation with an exacto knife (I hope I articulated this clear enough) to create stencils.

Each stencil was then held to a large sail cloth and spray paint was sprayed against sea fans creating a somewhat scaly texture. Even the way he referred some element of a subjects hair as "island of hair" was very indigenous and ocean like. Once each layer was completed it was attached by its top edge to a piece of wood so as to eventually install it. At the chest of each subject Asher dangled a lung like sea fan and used light from behind the sail cloth to create the shadow and illusion of  Sea Lungs.

He was deliberate, for this installation in particular, to use things that are easily and affordably sourced locally- sail cloth from marine stores or old used sails, sea fans washed up on our beaches, spray paint from the hardware, bristol board from Brydens ( everyone in Grenada knows Brydens is synonymous with stationary). Asher does this so as to debunk the idea that creating art is only for the few who can afford the expensive supplies- if one had a concept in mind, he believes, this particular style of creating is accessible. 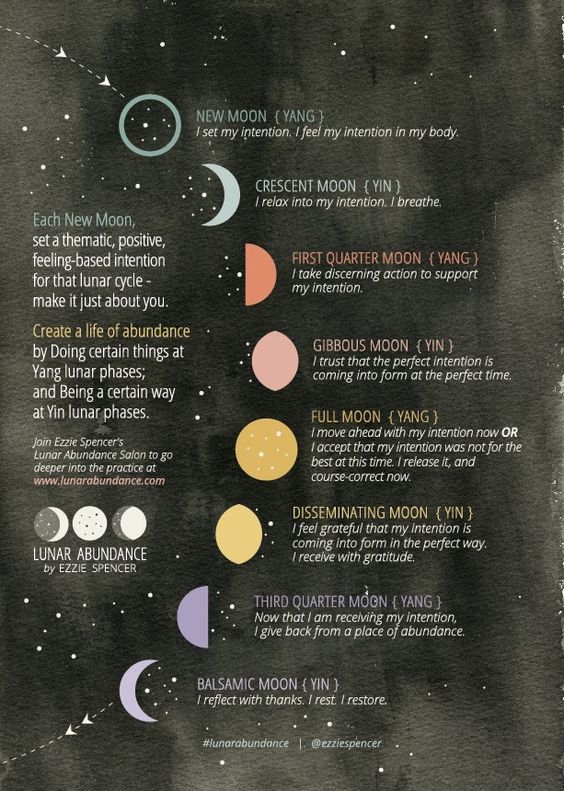 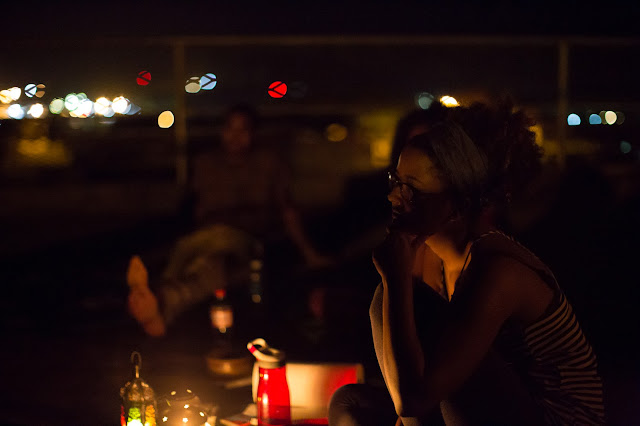